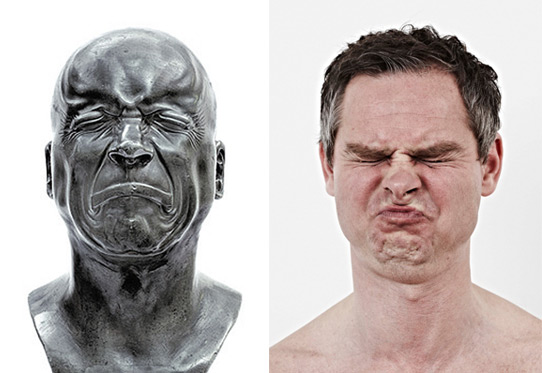 It may be simple happenstance that the “character heads” of Franz Xaver Messerschmidt (1736-1783) appear so contemporary today, a fact that has motivated Jen Fong’s recent photographic series on extreme expressions, After Messerschmidt. Working in the Austrian empire in the decade before the French Revolution revised the landscapes (inner and outer) of Europe, Messerschmidt produced a striking series of busts documenting in vivid detail the “sixty-four canonical grimaces” then thought to correspond to the “humours” of the body, and to arise from the somnambulist model of the unconscious articulated by Franz Anton Mesmer. Messerschmidt suffered from a debilitating intestinal illness currently thought to be Crohn’s disease, and in his marbles and bronzes he put his own physical torments to good use. But it’s the relationship to affect as an object of fascination that makes these sculptures seem so strikingly modern. Like Messerschmidt, our attention today is drawn to the expression of affect as it would be to something surreal and uncanny that we sense might release us from a bondage we are only dimly aware of. 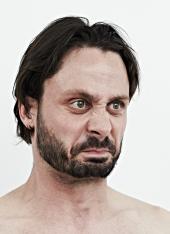 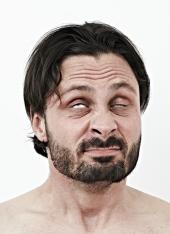 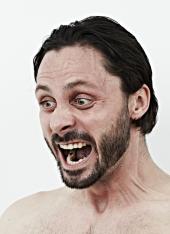 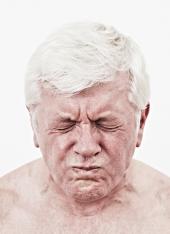 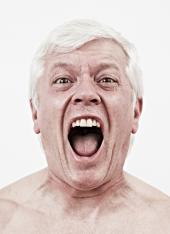 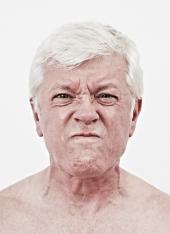 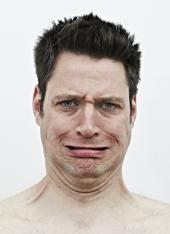 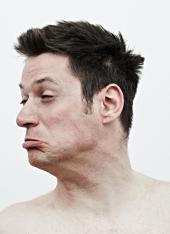 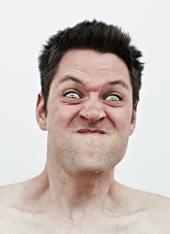 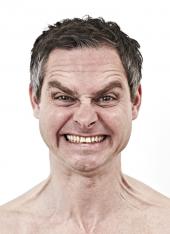 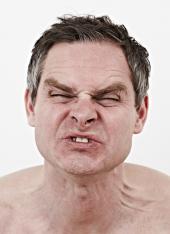 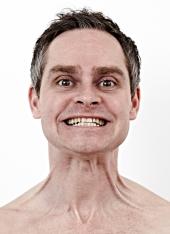 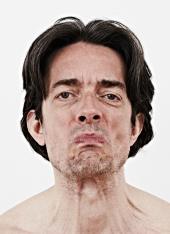 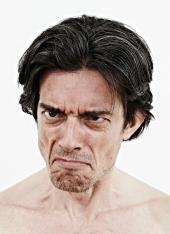 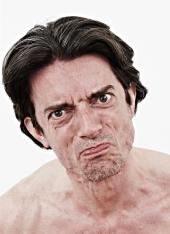 The expressiveness of Fong’s character-faces acts as a kind of affective trigger, like a little visual blow softened by a sense of humor, about Messerschmidt’s mania for categorization. Fong here is not simply conveying Messerschmidt into a photographic register, in other words. Rather, the funhouse humor in her portraits moves us back half a step from the severe, Germanic impulse at work in Messerschmidt’s heads without eliminating it entirely. Fong’s work balances an awareness of Messerschmidt’s mania for the taxonomic with a gleeful delight in the amped-up clownishness of our actual experience. We recognize ourselves in these living gargoyles, and how, at various moments in any given day we are seized by grotesque affect, those currents of pure expressiveness we are constantly suppressing via the kind of unity project propagated over the past century by the different schools of psychoanalysis. The fascination here is the fascination of Tourettes, or of everyday faux pas,’ the “imp of the perverse” that offers a portal to a covert multiplicity once we stop saying no to it. These photographs are all about saying yes to a more vivid mode of life, in other words, one that embraces all our exaggerated and flagrantly erroneous self-dramatizations, without allowing them to influence action.

The great German writer Heinrich von Kleist, a near contemporary of Messerschmidt and Mesmer, would have appreciated Fong’s balancing act here. Kleist’s fiction is full of sudden explosions of expressivity, and the covert operations of buried affect that undermine obsessive self-control. In his great work on theater – On the Marionette Theater – Kleist stresses the aesthetic value of an absence of consciousness that lies at the other end of the spectrum from the heads of Messerschmidt and Fong. Working with actors all the time I’ve come to respect something that might be called “affective intelligence.” We think the things we think, actors know, because doing so prolongs affective states we want more of, or, perhaps, ameliorates affective states we want less of. We feel…we are impacted by experience…energy flows deep within our emotive machinery…various thoughts percolate up into awareness…and we love to believe that we “had” those thoughts as the result of some autonomous analytical and cognitive process. Actors smile and nod at such conceits, inwardly yawning. When affects fall under the domain of the ego they become feelings or emotions, and actors, adept at becoming-others, understand that distinction too.

According to affect theorist Teresa Brennan (“Transmission of Affect,” 2004), the two poles in opposition here – grotesque expressivity on the one hand, and absence of affect on the other – can be reconciled via a recognition that affects are not fully our own. This is because, according to Brennan, unlike thoughts and emotions, affects undermine the solid boundaries of the self; we are triggered by shapes, colors, sounds, hormones, pheromones and other molecular entanglements that enter our various metabolic systems from the outside, and that we transmit again to those we encounter. We resonate affectively with one another in pre-linguistic forms of communication. One major crossroads for the display and transmission of affect is the human face, that hyper-expressive configuration of sensory organs that are also portals to the interior of the body, to the nervous system, and to the cognitive faculties as well. As any (good) actor knows, assume the habitual facial expressions of a character and you will begin to locate the affective ground, the truth of the character.

Like the deities and spirits worshipped by pantheists and animists, affective states are abroad and at large in the world, intensive expressivities looking for minds to seize and occupy. When we deny this alarming truth through fear or arrogance, we lose any hope of ameliorating the negative impacts of our cartoonish impulses, which often come to dominate us deep in shadow. Here we encounter the unsettling aspect of Messerschmidt’s heads, and of Fong’s gloss on Messerschmidt’s work. And perhaps we are drawn to the topic of affect because we are living in a time where affective intensities are being energized to dangerous levels by social and cultural inequities that show no signs of lessening anytime soon. A kind of urgency may be motivating our interest here, a sense that equanimity in the face of strong affective energies, and a healthy sense of humor, are capacities we might want to actively cultivate. The road ahead is bumpy, Fong’s photographs suggest, as it was for those alive when Messerschmidt was hard at work on his life-sized human gargoyles.

Special Thanks to the Models in Order of Appearance 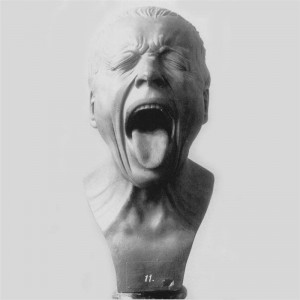